Tropical Storm Eta was the 28th storm of the 2020 Atlantic hurricane season and the first official storm of the year to make landfall in Florida. Eta took an unusual path, fluctuating between a hurricane and tropical storm as it wound through Central America, the Caribbean, and the Gulf of Mexico. Eta first made landfall on US soil in the FL Keys on the evening of November 8th, with wind gusts reaching up to 72 mph. It then looped back out into the Gulf and on a northern trajectory towards the Carolinas. Although the eye of the storm was still out in The Gulf, Southwest Florida got the brunt of Eta’s force on Wednesday, November 11th, with max wind speeds clocking in at 69 mph in Naples and up to 2.75 feet of storm surge recorded in Fort Myers. As the storm approached, RECON sensors recorded a drop in barometric pressure, increased winds with gusts up to 56 mph, exaggerated tidal levels at all sites, and extended periods of high salinity in estuary sites. 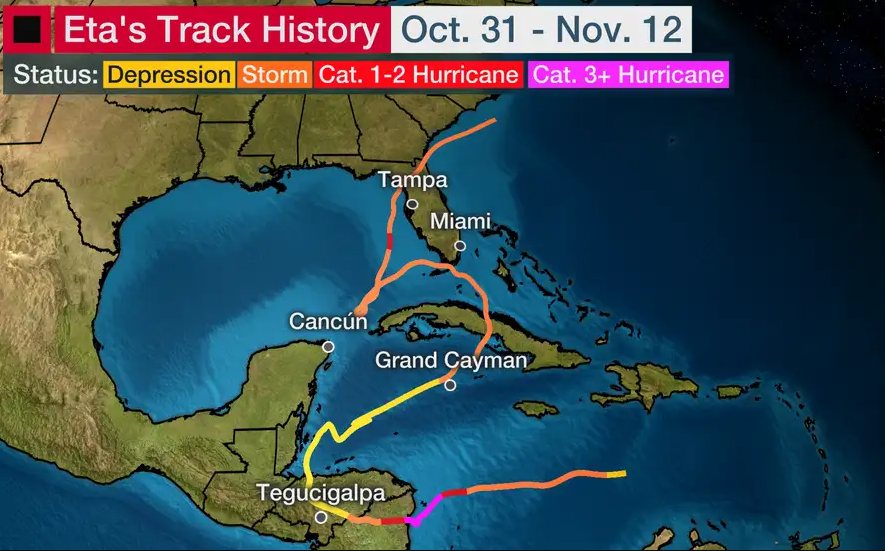 As Eta approached, a drop in barometric pressure was recorded at both the Redfish Pass and Fort Myers sites. Barometric pressure is essential in tracking storms. The faster and lower the drop, the quicker the storm will arrive and the greater its intensity will be.

As Eta was passing through on November 11th, Redfish Pass recorded a maximum wind speed of 43.2 mph with sustained winds over 30 mph for most of the day. At the Fort Myers RECON site, winds peaked at 11:00 am with winds of 34.9 mph recorded and fluctuated around 20 mph for the rest of the afternoon.

Eta raised the tide level at Shell Point over a foot higher than the recorded levels at this site for a month prior to the storm. Sustained levels of higher salinity can also be seen at high tide on the 11th at this estuary site, most likely due to the influx of salty water blown in by Eta.